What’s Tough about Leading People? A View from the Front-line

“This sucks!” As soon as the door closes and Susan is alone again in her office, she’s filled with a sense of disappointment. Susan has just completed a performance review with one of her direct reports, and the conversation was a tough one. The entire week has been dreadful; Susan had many difficult meetings, and one of her top-performers resigned. In fact, this last year, Susan reflects, has been the toughest of her career. It’s surprising because she was recently promoted, and was the perfect fit for this job. Everyone was excited for her to take on a much larger business responsibility; she was qualified, capable, and confident, and had managed to steadily grow the book of business faster than any of her peers. Susan still loves the business development part of her job, and continues to give it a significant amount of attention and energy. She thrives when she’s out with clients and prospects, looking for new opportunities. Admittedly, spending time with clients is also an opportunity for her to get away from one aspect that came with her new role: That of a people leader. Despite her previous success and deep knowledge of markets, clients, and the organization, she’s been struggling to find steady ground as a people leader. Frankly, she hates this part of the job. What’s worse, she knows that her team doesn’t think of her as a great leader. They don’t say it, but she can tell.

Susan’s story is not unique. On the contrary, it’s quite common, as Daniel Goleman pointed out in his 1996 article “What makes a leader?” This article describes the phenomenon of highly intelligent and highly skilled business people who assume leadership responsibility as part of a career move – and fail at the job.1 Goleman’s article introduced the idea that emotional intelligence was the critical ingredient to being an effective leader, and years later, the phenomenon of people failing at being people leaders even if they’re successful business people persists today.

People choose career advancement, not people leadership. And they assess their technical skill fit, not their leadership fit.

Running and growing the business is different from leading people, and from leading oneself. However, for many of us, when presented with the next opportunity on the career roadmap, we focus heavily on the technical skill-fit while the leadership fit falls to the wayside. We make sure we are a perfect fit for the position – that we have all of the analytical, strategic, technical, and problem-solving skills necessary – and give ourselves a thorough assessment. Meanwhile, less thought goes into the leadership role and our current capabilities (or lack thereof) in that area. Sometimes we justify our leadership capabilities with as little as “I’ve led a few people before – that should do it.” Think of your first career move into a broader managerial role that came with people responsibility. Did you ask yourself these questions?

For some of us, leading comes naturally. For most, however, it’s hard – even under the best of conditions. And it takes us by surprise when it really shouldn’t. This is because leading people is not easy. It is complex. It can be frustrating. It is time-consuming. It’s about emotions and expectations. Leading people is about mobilizing and optimizing the talent and skills of yourself and others in order to achieve results. And it is about the willingness to hold up the mirror and be very self-aware about your strengths and limitations – and maintaining the capacity to grow and develop. The good news is: becoming an effective leader can be learned. Working in a position where I have the privilege to interact with leaders on all levels in many different organizations, I’ve started inquiring into proven ways for how to become more effective as a leader. Here are some of the findings.

Being an effective leader isn’t tough. But becoming one can be.

“If only I knew” or “I wish someone had told me before going into the role” is what I hear most often when talking to people about their journey to becoming a leader. These days, organizations address the need for better leadership training by offering development programs for aspiring leaders. As a Senior Vice President for Talent Development at a global software firm put it, companies want people to know what they’re getting into before they’re getting into it. “We want a volunteer army of leaders, not people who think that leading a team is the only way to grow their career.” But don’t assume that such programs can replace the need for setting realistic expectations of what it means to succeed as a people leader. 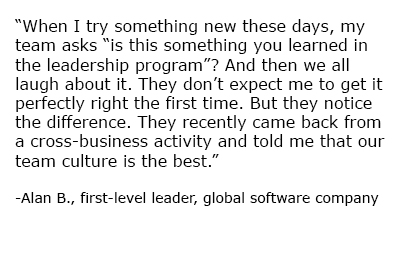 I recently facilitated a week long first-level leader development program and invited Alan, a program alumni with whom I had stayed in touch since he went through it four months earlier. As he shared with the group how his effectiveness as a leader had started to take shape since the program, a strikingly simple, yet powerful message surfaced: Alan had made the choice to become a more effective leader and as a result, was willing to give new things a try. He allowed himself to fail, then try again, and trust that it would get easier as he practiced. He focused on a few specific areas where he wanted to improve, and committed to working on these priorities until he mastered them. One particular trait Alan practiced was leading one-on-one meetings mainly through asking questions and listening attentively, rather than talking most of the time.

That choice sounds simple, but I’d argue that it is not an easy one. On the contrary, it takes courage. Not only because of the vulnerability that it shows, but because there’s typically little organizational tolerance or patience for being a newbie and for trying things out. But there should be. Alan’s approach is like rapid prototyping for becoming a leader. At its core, it is Alan’s expectation of himself – that even though he might not be the perfect leader the first time, learning is essential – which ultimately sets him up for success. If a one-on-one experiment goes just OK, he learns something. If it goes well, he also learns something. In other words, regardless of the outcome, he learns, and pretty fast too.

“Exemplary leadership is not a thing – the correct genes, an appointment, a technique, or the chance of the draw that favors one individual over another. Exemplary leadership is a way of being, whether you’re leading others or leading your own life. Leadership can be developed; it’s a choice and an option.”
– Richard Strozzi-Heckler, “The Leadership Dojo: Build Your Foundation as an Exemplary Leader”

Being effective as a leader can be learned. But it takes the courage to be a rookie again.

Recent neuroscience research shows that deep practice can change the structure of neuropathways in the brain, which in return allows for mindset to shift. Thus, one of the success factors for becoming an effective leader is to engage in frequent practice and experimentation, and there are many techniques and approaches to do so. By allowing yourself to be a rookie again, and learning to fail forward when facing your most pivotal leadership moments, implementing these techniques can help you be the best leader you can be – even without a lot of experience.

One such technique is running a mental stress-test of a pivotal leadership situation before going in. It’s called a Pre-mortem – and it is a powerful method where you prepare yourself for multiple outcomes, as opposed to fixating on one particular outcome against which you define success or failure.

To do a Pre-mortem of a pivotal leadership moment, ask yourself:

Another technique is to engage your body in learning, e.g. learning a new sport. The body is a powerful vehicle for learning, and has what is referred to as muscle memory. Putting the body through a physical beginner experience is a powerful way for opening one’s mind to growth – and observing how we deal with learning something new.

For someone like Susan, it might be difficult to feel motivated to take the necessary steps towards growing into an effective leader. The real piece of work would be herself. Alan’s story makes this very clear; his team didn’t change anything. Their team dynamics and performance changed because of how Alan changed his interaction with them. The team then had the opportunity and space to respond differently to Alan and to each other. Whether or not something similar is worth a try is for each person to decide individually.

Some food for thought, however, comes from Marshall Goldsmith and Mark Reiter’s intriguing finding in their latest book Triggers: Sparking Positive Change and Making it Last. As part of their research, they asked people the question, “What’s the biggest behavioral change you’ve ever made?” The most poignant answers came from people recalling the behavior they should have changed but didn’t. They’re reflecting on their failure to become the person they wanted to be.2 Don’t let the same be said of you.

It is okay to be in a learning mode. In fact, have fun with it. It will be rewarded with people wanting to work with you, and be led by you.