What actions are successful firms taking to increase employee buy-in for their firm-wide strategy priorities?

The Economist Intelligence Unit (EIU), with sponsorship from BTS, conducted a survey of 228 business leaders to assess the factors that determine effective buy-in for corporate strategy throughout an organization.

More than half of the respondents are C-level executives, with the remainder holding a variety of positions—ranging from SVP/VP to front-line manager. About half of the organizations represented in the survey have annual revenue greater than $1bn; the survey is equally representative of North America, Asia-Pacific and Europe.

The survey found that while firms typically find it difficult to drive buy-in of strategic direction among middle- and lower-ranked employees, top-performing companies, defined by those reporting above-average profitability relative to peers, regularly achieve widespread buy-in at all levels of the organization. Leading firms, which also tend to report above-average revenue growth and market share, accomplish this by following these tactics:

In essence, the differentiator that sets top performers apart is that they recognize the strong role employees at all levels of the organization play in achieving business results.

1. Firms struggle to gain buy-in below the highest levels of management 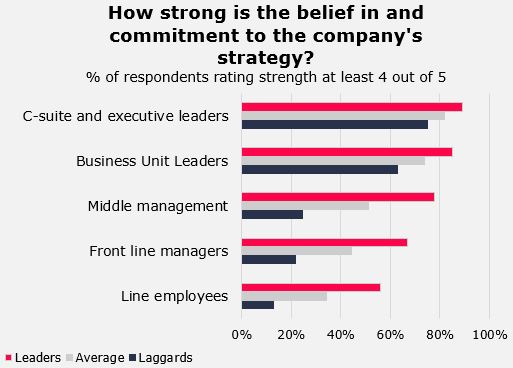 Executives express widespread agreement regarding the importance of aligning nearly every function with overall company strategy, with nearly 9 in 10 executives (86%) rating strategy alignment as “important” or “very important” for the core business. Although there is across-the-board executive acknowledgement of the crucial role of commitment to strategy, the survey found important differences in the degree of buy-in reported by high-performing and low-performing firms. Respondents were asked to rate their company’s profitability relative to its peers; they were then grouped into those reporting market leading or above-average profitability (“leaders”) and those who reported average profitability or below (“laggards”).

The differences between the two groups are relatively moderate at the senior leadership level. About 89% of leaders and 76% of laggards report that C-suite executives have a high level of commitment to the company’s strategy. At lower levels of management, however, the gap widens. For example, only 56% of laggards report high commitment among their heads of business units, compared with 80% of leaders—wide differences were also present among middle management, front-line managers and line employees. In other words, the data suggest a correlation between businesses with buy-in to organizational strategy at every level and above-average profitability. 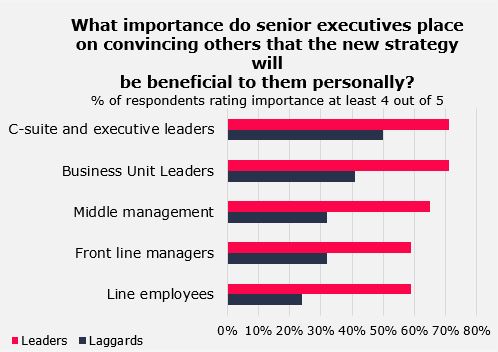 Effort expended by top executives to promote new strategies has a direct impact on the level of strategic buy-in achieved at successively lower levels. The proportion of all survey respondents who say senior executives give high importance (at least 4 out of 5) to convincing employees that new strategies are the right course for the company drops steadily from 80% for the C-level to 53% for middle management to only 30% for line employees. Again, these overall findings mask sharp differences among leaders and laggards. Leaders – those who rate their profitability as above average- report their senior executives attach consistently higher levels of importance to convincing workers that the current strategy is the correct one and make efforts to engage with other executives (84%), business unit leaders (75%) middle management (59%) or front-line managers (50%). In contrast, laggards tend to employ a less energetic approach to promoting strategy, concentrating their efforts on other executives (76%), while middle management (47%) and front-line managers (39%) are comparatively neglected.

The survey found similar patterns for other efforts to promote buy-in to company strategy, including convincing employees that the company’s strategic goals can be realistically accomplished and that successful execution will be personally beneficial. Leaders consistently attach higher levels of importance to selling strategy internally at every level than do their laggard counterparts. In other words, the survey findings suggest a correlation between profitability and a strong effort to promote strategic buy-in throughout the organization.

At the lower levels of the organization, the survey shows buy-in and understanding of corporate strategy to be higher when executives make explicit efforts to convince those employees of the company’s goals. When respondents are asked how well they explain their role in the business unit’s overall strategy, the pay-offs of the hands-on approach become apparent. Employees who agree that management works directly with them to communicate company strategy and works to establish clear expectations are more likely to say they can explain how strategy relates to their day-to-day decisions (80%) than employees who are treated to less comprehensive orientations. Only 56% of those who meet with management for Q&A regarding strategy and 44% of those who are merely forwarded strategic communications say they can explain how the strategy affects their daily decisions and work.

Respondents who report regular collaboration with peers outside of their business unit or chain of command also report superior outcomes in building buy-in to company strategies. This applies at every level of the organizational hierarchy, though the impact is strongest at the top. For example, in firms where respondents report regular collaboration (multiple times per week), 87% of C-level executives also report having a strong commitment to strategic execution (top 2 of 5 ratings), compared with 72% in settings with infrequent collaboration. The correlation with peer collaboration also applies to other levels, especially business unit leaders (74% v 56%), middle management (52% v 44%) and line employees (24% v 17%).

The survey finds that corporate communications vehicles help to build buy-in, particularly at the middle levels where getting commitment can be difficult. For example, respondents from firms that conduct regular town-hall meetings—at all levels of the organization—are more likely to report strong commitment to strategy among front-line managers (70% v 54%), middle management (68% v 54%) and business unit leaders (65% v 50%). Separating the impacts of different communications channels is difficult—most firms use multiple approaches—but the results are similar for day events, webinars and other digital communications, and company newsletters.

The survey also found that a notable gulf exists between larger and smaller companies in how they communicate with their employees, with the former being more likely both to employ an organised method and to use more than one. Larger firms much more frequently deploy corporate communications packages (75% v 42%), all-day events (58% v 37%) and, especially, video or digital telecommunication (58% v 15%), while smaller firms lag in almost every measured category.

Based on our experiences from this and similar decision-making programs we have run for other clients, we can confidently point to two effective and co-dependent strategies for making better decisions and avoiding friction and issues like analysis paralysis.

Strategic buy-in and employee satisfaction go hand in hand and most companies systematically assess satisfaction. More than half of survey respondents (53%) say they use regular employee-satisfaction surveys, with about 40% saying that this is a company-wide effort and supported by high-level leaders. Respondents from leader organizations report more extensive use of employee-satisfaction assessments in virtually every category. They are more likely to have high-level executives promote the concept and value of employee engagement (46% v 35%), to engage in company-wide efforts to gauge employee satisfaction (44% v 38%) and to assess engagement levels at town halls and conferences (35% v 26%). Respondents from leader organizations are also more likely to report that they derive benefit from these efforts, particularly in terms of creating an attractive culture (60% v 49%), reducing employee turnover (55% v 41%) and increasing the effectiveness of strategy implementation (50% v 39%).

Regarding feedback protocols, nearly two-thirds of respondents (65%) say that employees share their thoughts with direct management—whether or not those thoughts are passed up the chain is left to management’s discretion. But leaders tend to actively seek out employee feedback and engage with it constructively. More than half of leaders (54%) say that management meets with groups of direct reports to discuss the latter’s ideas about company strategy, compared with only 39% of laggards. Leaders are also more likely to have internal platforms like digital outlets—which allow for employee feedback (42% v 34%). In contrast, 28% of laggards say feedback is not encouraged or that it is not addressed, opinions shared by fewer than 1 in 5 leaders (18%).

Leaders are also more apt to acknowledge and reward exemplary performance in general; in particular, they are more likely (43% v 27%) to give exceptional performers access to further training or educational opportunities—thus creating a continuous feedback loop providing value to the company. This selective training is also an area where smaller organizations (with annual revenue under $1bn) have a notable advantage over their larger counterparts: About 59% of smaller-company executives say that they reward employees in this manner, compared with only 47% of those from larger firms.

Negative internal feedback is vital to a company’s success, however unwelcome. The survey found a significant difference of opinion among respondents regarding the ease and comfort with which it is conveyed within the organization. Constructive criticism finds a somewhat more welcoming environment among leader organizations than among laggards—45% of leaders state that more than one-quarter of their employees are confident that it would result in a positive course correction, as opposed to only 35% of laggards. And going outside the system to give negative feedback—a reasonably remote possibility by any metric—is nearly unthinkable among leader organizations, with nearly all leaders (99%) reporting that their employees are very unlikely to do so. Respondents from smaller organizations also state a belief that employees are more comfortable and confident giving negative feedback than respondents at their larger counterparts.

Implementing new strategies and establishing high levels of strategic alignment are critical for most organizations. This survey concludes that the most successful companies:

Learn more about the strategy execution capabilities most critical to success

Read the 2014 BTS and Economist Intelligence Unit Research Report entitled “Cracking the Code: The Secret to Successful Strategy Execution & Lessons for the C-Suite.”

The benefits of this comprehensive approach to strategic buy-in are significant, with heightened faith in the company’s direction at all levels of the organization and an easier path towards implementing the strategies. Executives understand this, but the benchmarks set by the top performers demonstrate many firms still have a long way to go.