Smart CEOs respond to market shifts by changing the way they sell. This applies whether it’s flat revenue, new disruptive competitors, or changing customer expectations. But many organizations struggle during these transformations, as the people tasked with buying and selling the company’s new offering—both salespeople and customers—have a difficult time adapting to the company’s new identity.

We have found that companies looking to change the way they sell can make these transitions successfully by focusing on the variables—both Y and what we call XY: the selling of both X and Y together, either to the same customers or by the same salespeople to different customers.

X and Y can be what you sell or how you sell. Examples would be a change from selling on-premises software (X) to selling cloud solutions (Y), or from selling to technical buyers (X) to selling to C-suite buyers (Y). Regardless of the specific go-to-market change, the story is the same—CEOs see it as their job to get the company to execute on the new vision and sell Y more quickly. But people resist change, and efforts to speed up the transition further alienate them.

In our experience, CEOs have a greater chance for success when they intentionally plan for a transition period where people sell the current and new offerings together (XY). To illustrate, let’s look at two examples of companies that have transformed what or how they sell.

This is a company that failed to define the XY phase clearly enough. Bridgewater is a health insurance broker. Over several years, their margins began to decline, and the board of directors brought in a new CEO—Wellington, who quickly assembled a new vision for the company. Not only would it offer health insurance brokerage services, it would also be a consultant to its clients who were struggling to adapt to the quickly changing healthcare environment in the United States.

Immediately, many top executives got on board, but many of the rank-and-file brokers were hesitant. They felt that Wellington’s strategy would take Bridgewater into an area where the firm did not have well-defined expertise and work processes.

To solve the problem, Bridgewater fleshed out its plans, and then hosted week-long training workshops for its top 500 leaders and client managers. Many people began pursuing the new approach with their clients and began to show early signs of success. However, the new revenue was slow to come. The advisory approach had long sales cycles, and there was a learning curve for the Bridgewater account managers. While the new approach was taking hold, revenue in the existing business continued to slide. A backlash grew among those who never supported the new strategy. In less than a year, Wellington was fired by the board of directors, and the new strategy was scrapped.

Now let’s look at an example of a company that successfully changed what it sold and did so by identifying the XY midpoint clearly.

Exactitude was the first company to put business tax software into the cloud. Over time though, competitive offerings emerged, and the CEO began articulating a new future where the company would offer more cloud-based software to help businesses more quickly and more simply address a range of business functions.

The introduction of the new product offerings to the original business tax software is an example of how the XY approach can work successfully. Sellers at Exactitude are segmented by the size of the company they sell to: small business, medium business, or large companies. Most customers enter through the X door, and all Exactitude salespeople can tell the X story. Then they have a clear process for upselling the customer to Y. While the leaders at Exactitude would be the first to say that they have made mistakes, are still learning, and expect even better results in the future, they have definitely achieved success to date.

What lessons do these examples provide?

For Exactitude, the Y vision was to have a range of cloud-based software that simplifies their customers’ business needs, particularly in niches underserved by the big software providers or better served through cloud-based offerings. In launching this vision, Exactitude leaders have been careful to frame it within the existing approach to selling business tax software. That helps create the XY clarity that salespeople need. For example, Exactitude carefully communicates the new conversation that sellers should have with existing buyers. That conversation includes discussion about the existing X product (business tax software) and the new Y products (payroll and performance management software).

At Bridgewater, while Wellington and his team always communicated a vision of both X (brokerage) and Y (consulting), they did not create the execution plan for selling both X and Y together. As often happens, they assumed that since X was the legacy business, they should focus on what was new and different (Y) and emphasize how to do and sell that work in their presentations. What the rank-and-file missed was a sufficiently clear explanation of the XY phase. To them the message was “It is time to turn off X and turn on Y.”

When some companies expand their brand by changing their offering, they often frame it in entirely new terms, trying to become a very different company. While Wellington tried to transform Bridgewater all at once, Exactitude was careful to frame its new vision as very connected to the core of what the company has always been and what customers have come to expect from it.

CEOs must be visionaries, always on the lookout for the next direction to take their company and remain relevant. But an expansive vision should be carried out with an incremental execution strategy that is easy for salespeople to understand and implement. 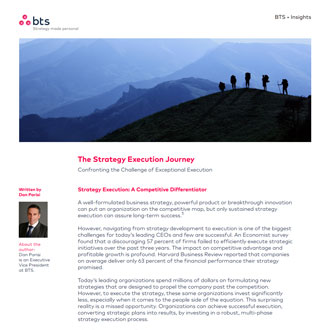 A Well-Formulated Business Strategy, Powerful Product or Breakthrough Innovation Can put an Organization on the Competitive Map, but Only Sustained Strategy Execution can Assure Long-term Success.

END_OF_DOCUMENT_TOKEN_TO_BE_REPLACED 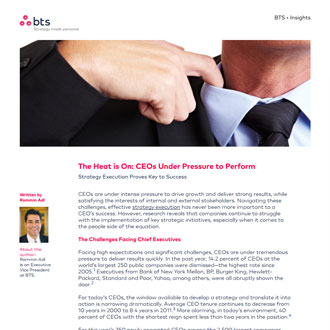 The Heat is On: CEOs Under Pressure to Perform

CEOs Are Under Intense Pressure to Drive Growth and Deliver Strong Results, While Satisfying the Interests of Internal and External Stakeholders.

END_OF_DOCUMENT_TOKEN_TO_BE_REPLACED 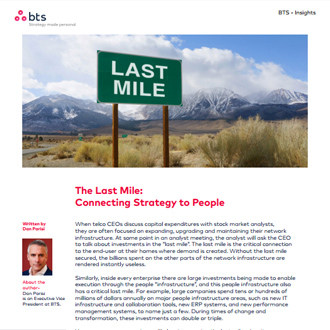 Learn How to Set your People Up for Success and Conquer this Critical ‘Last Mile’ of Strategy Execution.