Creativity: an Essential Quality for Survival in Tomorrow’s Labor Market

We all make hundreds of decisions on a daily basis. Some of them are relevant and meaningful, others unimportant and commonplace. Do I have time to finish this report before lunch? What should I have for lunch? Should I call my client or pay him a visit? And countless more like these, every day. Every hour. Every minute.

Our brain is very good at making decisions. When it faces a challenge, it channels all available information in what Edward de Bono called “Rivers of Thinking” (Edward de Bono is one of the world’s most prominent creativity experts, coining the term “lateral thinking” in 1967). These rivers are like “thought roads”, formed by the interconnection of millions of neurons, which start to form when we are kids and are the result of all our experiences. Each challenge falls in a particular river, which allows us to make a quick decision. Therefore, our brain is not designed to find original solutions, but to apply past successful ones to new problems.

These rivers of thinking have their advantages, since they allow us to leverage our experience in our favor, in both personal and professional environments. The drawback is that sometimes, what we want to do is actually find new solutions – that is, escape the rivers of thinking and be creative.

A few months ago, during a town hall meeting in Indiana, President Barack Obama was asked about manufacturing jobs disappearing in some of the factories in the state, to which he answered, rather bluntly, that some jobs “are just not coming back”. Obama mentioned the higher efficiency of the plants and the effects of automation have made it so that fewer workers are needed to produce the same number of units. He explained that this brings benefits, like the birth of new industries – such as robotics – but there is indeed a downside: the disappearance of other kinds of jobs, which we can do nothing about.

What types of jobs does Obama predict are going to keep disappearing in America? Those in which using our rivers of thinking is enough. The worker in an assembly line; the supermarket cashier; the person that sells tickets at the cinema. In the 21st century, we are witnessing the decline in the number of jobs in which creativity is not necessary, due to artificial intelligence being advanced enough to take care of them, and companies outsourcing manual jobs to cheaper emerging countries. And this trend is not slowing down. 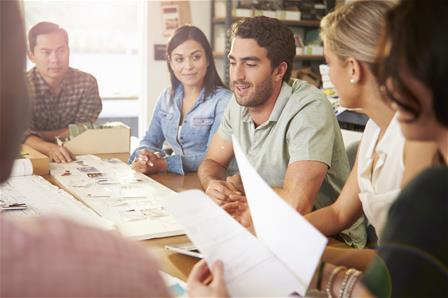 Being able to leave our rivers of thinking is a key requirement to remain active in tomorrow’s labor market. Leading companies do not want employees that go with the flow and do what has always been done. They want professionals who can discover new and original solutions, adding value to the company.

When presented with this idea, some companies think that it’s not fair to demand creativity from their employees. They say that being creative is something you are either born with or without, and nobody likes being judged for something they cannot control. The thing is, they couldn’t be further from the truth: being creative is a discipline that can be learned and practiced, like riding a bike or budgeting a project.

Companies are starting to realize this, and that is why they are making the development of a culture of innovation, which includes the improvement of creative thinking skills, a priority. For that reason, we had the chance to partner with one of the biggest telecom providers in the world – they invested $15 million during the last three years to strengthen the creative thinking skills and innovation execution capabilities of around 5,000 of their employees globally. Another example is a Fortune 100 Silicon Valley tech company who put $3 million into a project to improve the innovation leadership skills of 2,500 of their leaders, with the ultimate goal of shifting their current business model. These are just two examples among many.

It is not a coincidence that the most innovative and valuable companies in the world, like Apple, Google or Tesla, favor employees with the ability to add value in an independent way and beyond what is expected. At the same time, most of the big historic companies, which have existed for decades, keep losing their competitive edge due to a rigid work culture and low trust in the innovative capabilities of their workforce.

Therefore, it will be the proactive and creative worker who is the most valued in the future. They will be able to differentiate themselves from their colleagues and survive in a market that gives more and more importance to these qualities. And the ones that remain stuck in their rivers of thinking will, like Obama predicted, see themselves taken out of the market.