A condensed version was originally published by the London Business School Review.

The best way to illustrate how much people have a problem with change is to ask an audience the following questions: “Who believes change is inevitable?” and “Should people see change as something positive?” Most of the audience will likely raise their hands to affirm both questions.

Next ask, “Who is comfortable about changing their own way of doing things? Who has their preferred side of the bed but is okay to change sides at times? Who is fine about changing plans after they’ve made them?” Likely, the audience will go quiet and you will see only a few hands go up. The point is, we love change… as long as the change is made by others, and we don’t have to change ourselves.

In many studies, a common theme appears: Change or transformational programs often fail (i.e. they do not reach their targets, whether in time-to-change or in extent-of-change). There can be many factors behind this failure, ranging from not supplying realistic targets to not having the right sponsorship or the right processes for the change. However, the number one reason why change fails is organizational resistance…i.e., people . 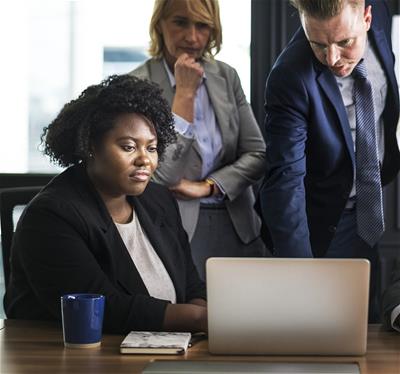 So why do people disrupt transformation efforts? John P Kotter, Professor of Leadership, Emeritus at Harvard Business School and one of the earlier thinkers in the field of change management, looked at successful and unsuccessful change programmes and came back with the following eight factors for failure:

These failure factors offer a great way to understand best practices, and can be translated inversely into an eight-step process of change (i.e. “Establish a sense of urgency,” “Create a powerful guiding coalition,” etc.). Many of these points are used consistently in change programs, such as “Look for quick wins” and “Have a well-communicated vision.”

In his later work, “Accelerate: Building Strategic Agility for a Faster Moving World,” Kotter expanded upon this eight-step model, for as he says, “The 21st century will force us all to evolve toward a fundamentally new form of organisation.”

To properly align the model to today’s demanding and competitive business environment, he made four key revisions:

The business world today is vastly different from 20 years ago. Change is now constant and we need to think of the change process no longer as just a question of project management and communication, but rather a leadership issue that requires a deep shift in mindset.

This viewpoint is very much in line with what other practitioners are saying about successful transformations. Boston Consulting Group describes a new type of transformational leadership that sits at the intersection of being a directive leader (someone who defines the vision and strategic priorities, sets the goals and knows the way ahead) and being a leader who can delegate execution to other stakeholders and have an inclusive leadership approach (mobilising and empowering the teams and actively seeking feedback).

McKinsey, on the other hand, has an influence model that speaks of four building blocks of change. This model says that if change is to happen in an organisation, it will be a combination of the leaders being role models, the people having a clear understanding of and alignment to the change – as well as the capabilities to act on it – and the organisation having the systems and processes to make this happen.

While these models vary in terms of specifics, the practitioners and experts agree on the following:

In our experience, there are four principles that require attention. If these are not managed correctly, they give rise to deeper issues that impede success in even the best-performing organisations:

Below are ways we have found to combat such situations and improve the odds of success.

Communication becomes more of an advertising campaign with unidirectional messaging targeted to the “what” and “how” rather than the “why” behind the change.

The flaws tend to be:

1. One-way communication – which means that the recipients of the information are left alone to interpret it for themselves (so the same information can be seen in different ways by different people, depending on their previous experiences, current mindset, etc.). Additionally, attention spans vary so greatly from person to person that a large percentage of the communication may be lost.

2. Communication focuses solely on the “what is next” and the “what to do”, which means that recipients are not guided through the “why” of the change. Thus, a sense of urgency is not created, and people are less open to and motivated by the “what to do next.”

The way to ensure engagement and alignment is to work through an interactive communication tool. Participants can use discovery-based methodologies in a structured way to reach conclusions themselves as to why the change needs to happen, and what they need to do to make it happen. These tools have to be company- and moment-specific and must be leader-led to ensure the right conversations are taking place. Such tools, like engage maps, are structured around the three themes of “Why the change”, “What is the new framework / model and what does it mean for us”, and “How will we get from where we are to the new desired state.”

Leaders who are seen as “false sponsors” because their attention is divided and their interest wavers.

In many changes and transformations, leaders focus on “business as usual” and delegate the change process to departments like HR or IT, or to external consultants. This produces a disconnect. In addition, leaders are often not aligned to the changes themselves and, therefore, when their teams face issues or questions, their responses and actions are contradictory to the change.

Principle three: the need for measurement and monitoring

Progress that rarely is measured formally, and when it is, looks only at lagging indicators.

Many transformation and change efforts focus on the very end indicators (such as percentage of new digital clients in the bank), which become lagging indicators (only measured after it happens). Sometimes these types of measurement make it difficult to show the impact of the transformation process.

It is important to be able to track both result-oriented indicators as well as activity indicators, as they can reveal a leading effect. These leading indicators can also identify the barriers to transformation and give us “heat maps” as to where the positive action is happening.

Principle four: the essence of focus

A continuous launch of change initiatives and priorities that weigh down the organisation and make focus impossible.

Change fatigue is a common issue in organizations: “This year’s change initiative is ….” tends to be a joke for employees. The complexity of the tools and models of an organization can make it difficult for employees to know what is expected from them.

It is important for the organization to do two things:

1. Limit transformational actions to the ones that are crucial and require the employees’ full attention

2. Link these actions to the rest of the changes in the organization, such as compensation system changes, reporting shifts, and organizational moves.

Leading a transformation in an organization is never an easy task. Nobody likes change, and we all look at things with certain prejudice and skepticism, and often avoid taking action as it seems to be the safer thing to do.

Given this human reaction, it is imperative to invest the time and resources in ensuring a change management people process is in place that looks at the four principles and implements ways to ensure the right impact. As an old African proverb states, “For tomorrow belongs to the people who prepare for it today.”