Companies must adopt a growth mindset and build a coaching culture in order to thrive in today’s highly competitive and evolving markets. In a coaching culture, everyone is encouraged to question their assumptions and seek out new ways of thinking and leading. Every success or failure is a chance to grow as individuals and as an organization.

We may live in a world of iPhones right now, but when the device debuted in 2007, it was BlackBerry that dominated the mobile market. Even with the iPhone available, BlackBerry’s sales kept trending upward for the four years that followed.

BlackBerry felt confident about the success of its model. Apple was doing things differently, for example by introducing a touchscreen. By the time BlackBerry knew what hit it, the iPhone had become ubiquitous. BlackBerry’s market share dwindled, and its stock dropped into the single digits.

BlackBerry’s mistake was being overconfident in its approach and not open to learning. It is just one example of why companies must adopt a growth mindset and build a learning culture to thrive in the contemporary market. Every success or failure is a chance for leaders to coach their employees to learn. 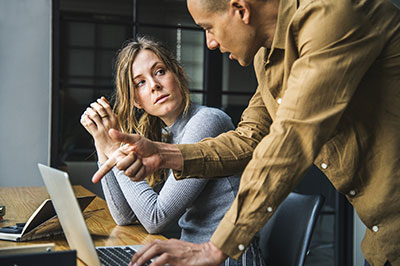 The only way for organizations to thrive is to continually learn and grow, and that doesn’t happen with a top-down leadership culture. Instead, managers and executives must become coaches enabling employees to continually develop their skills and professional knowledge. It’s good for the individual, and it’s good for the company.

Internal coaching increases retention, engagement, productivity, and performance. How much so? A Mabey and Ramirez study found that managers who are skilled at developing their people achieve a 25% uplift in employee performance, while a report by the International Coaching Federation revealed that 60% of companies with strong coaching cultures report above-average revenue.

It’s simple, if not always easy. There is a big difference between teaching a few leadership coaching skills and building a genuine coaching culture.

Learning to Build a Coaching Culture

How can you tell whether your company has a strong culture of coaching? It’s not enough to run leadership training or to tweak the performance management process. Instead, a great business will weave the philosophy into the fabric of the entire business.

Three strategies that seem to have a disproportionate impact on creating a coaching culture are:

Many leaders think of coaching on a performance model: They have a template of what “good” looks like and give people feedback until they get there. This is an effective first step, but to create a true learning culture, your leaders will have to evolve their approach. They need to supplement performance coaching with person-centered coaching — helping people discover insight for and about themselves. In the process, you will both be able to challenge the way you think about your business.

Feedback should be continuous and omnidirectional. Employees need to know it’s safe and even expected to ask for and receive it. Reimagining constructive criticism as an opportunity to improve will itself grow your learning culture.

Adult learning is less about acquiring new knowledge and more about challenging existing beliefs. For that reason, a culture of learning goes far beyond reading books or attending seminars. In a learning culture, everyone is encouraged to question their assumptions and seek out new ways of thinking. And, of course, the best way for leaders to create this is to model it themselves and coach others accordingly.

Often the biggest learning happens at the most uncomfortable times. Embracing the discomfort and learning from it and spreading that knowledge through coaching will afford your organization the greatest opportunities for growth.